Border Interfaith Clergy: You Are Not Alone

Civic academies organized by Border Interfaith are drawing upwards of 50 parishioners per session ready to learn how to use their civil rights to protect family members from deportation.  At a recent session, Rev. Pablo Matta, the pastor of St. Paul the Apostle Catholic Church told parishioners “You are not alone.”  He additionally explained, “We are not asking anyone to violate the law.  We are using the laws that exist.”

Organizers reminded immigrants that they have the right to remain silent, a right to an attorney and not to sign any document given to them by immigration agents without first talking to a lawyer.  They also advised family members not to open the door to US Immigration and Customs Enforcement agents without a warrant.

“Once they enter, many things can happen. There could be other people in the home. The immigration agents may starting asking, ‘You, what’s your name? How long have you been here?’ … They came in looking for Arturo and they took Maria, Jose, Raul and several people. So, don’t do it. Don’t do it.” 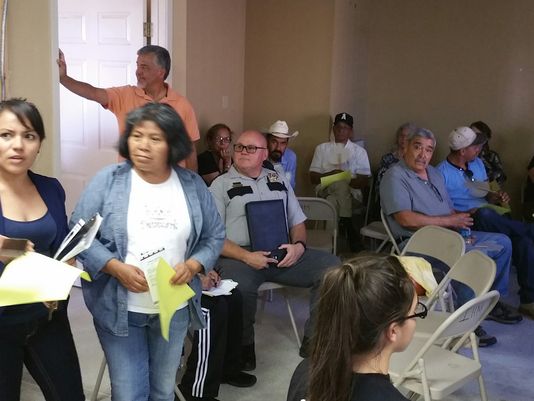 Over 150 leaders of Border Interfaith participated in three meetings with El Paso Sheriff Richard Wiles (including Lieutenants and Deputies) over the course of two months to build relationships of trust and to address community concerns.

Said Lead Organizer Arturo Aguila, “People were sharing their struggles…but then deputies and lieutenants had a chance to speak.  People were able to see them as human beings and that they were afraid at times when they would come to some neighborhoods.  It really changed the whole dialogue.” 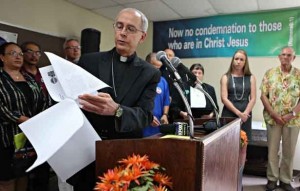 Bishops, and clergy from Border Interfaith and El Paso Interreligious Sponsoring Organization (EPISO), are calling for added protections for the tens of thousands of unaccompanied Central American children at the Texas border.

In a well-attended press conference, Catholic Bishop Mark Seitz presented a letter addressed to the President and to Congress, signed by hundreds of clergy, that detailed specific recommendations.

El Paso religious leaders detailed that protections established in the 2008 Wilberforce Trafficking Victims Act for those that arrive on our border seeking refuge include the provision of legal assistance to any minor under 18 years of age, and attention to the religious needs of the children and family by granting clergy access to US Border Patrol detention facilities and the US Office of Refugee Resettlement.